skip to main | skip to sidebar


"As I mentioned in the forum George Ernest Goodman, RAF Officer, he was shot down by flak on 14 June 1941. He was found and buried next to his Hurricane at the sixtieth kilometre of the Bardia Road, on or just after 14 June 1941 by a unit of the Italian army. The British did not recover his body until 1943. I would like to know which unit and if there are any pictures of the wreck. With all the brutality of war it is nice to find these civilized acts once in a while."

Grazie a chiunque sappia dare informazioni.
Thanks to anyone who can give information.
Peppe
Pubblicato da Peppe a 06:02 Nessun commento: 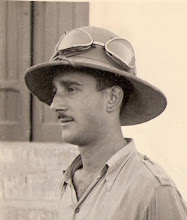